in the early part of the War Between the States (Civil War), showing the State Capitol.  Located in Davidson County, the scene includes the Cumberland River and the skyline of Nashville.  The view was restored and hand colored by Southern artist, Judy L. Kirchner. 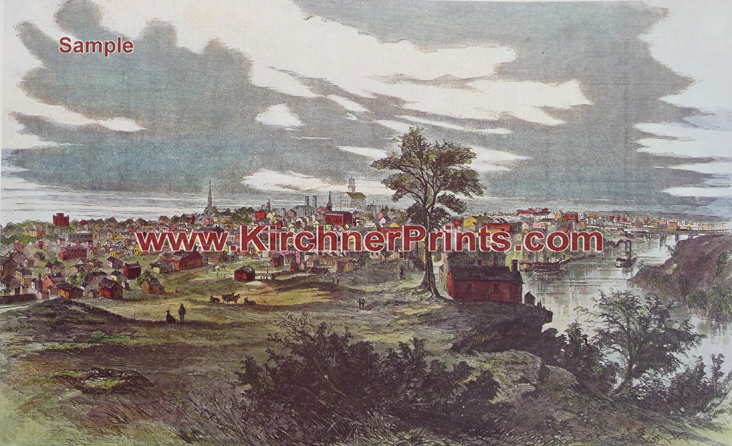 Nashville was named to honor General Francis Nash, a hero from North Carolina who was killed in the Revolutionary War at Germantown. Nashville was settled in 1779 and 1780 on the Cumberland River in what is now Middle Tennessee. One of the founding "daughters" was Rachel Donelson (later married Andrew Jackson) who came to what is now Nashville as a thirteen year old girl. The town was under the jurisdiction of North Carolina until Tennessee became a state in 1796.

The original name was Nashborough, but that was quickly changed to Nashville to remove association with England during the American Revolutionary War. During that war the British provided arms and incited hostilities between the Native Americans and the settlers. Nashborough was attacked in 1781 but survived due in part to Mrs. Robertson turning dogs on the attackers. The last significant attack by Native Americans was in 1792, several years after the conclusion of the Revolutionary War.

Nashville gained national prominence when Andrew Jackson defeated the British at New Orleans in the War of 1812, and became president from 1829 to 1837. Because of the Cumberland River, Nashville was an important trade center. Railroads were open to Louisville and Atlanta prior to the War Between the States. There were continuous railroad links to New Orleans, Charleston, Richmond and many other points.

In the late spring of 1861, the city of Nashville voted 3,029 for secession and 250 against secession from the Union. The city fell to Union troops in 1862, and was an occupied city for three years. Churches were confiscated for secular use, ministers and editors imprisoned, trees cut for use as fuel, schools closed and businesses appropriated.

After the war, prosperity gradually returned. Vanderbilt University and Fisk University were founded, the Maxwell House hotel was completed, and many prominent buildings were constructed.

Southern artist, Judy L. Kirchner hand colored and restored this antique black and white print of a "View of the City of Nashville - 1862."  The scarce original wood engraving was hand water colored with meticulous care and unsurpassed craftsmanship.