Southern Artist George B. Kirchner redrew this print from the antique F.W. Strickland print of the home of Andrew and Rachel Jackson.   "Old Hickory" was our Seventh President and entertained the Marquis de Lafayette.  The Jacksons' tomb is in the historical gardens next to the home of the General. 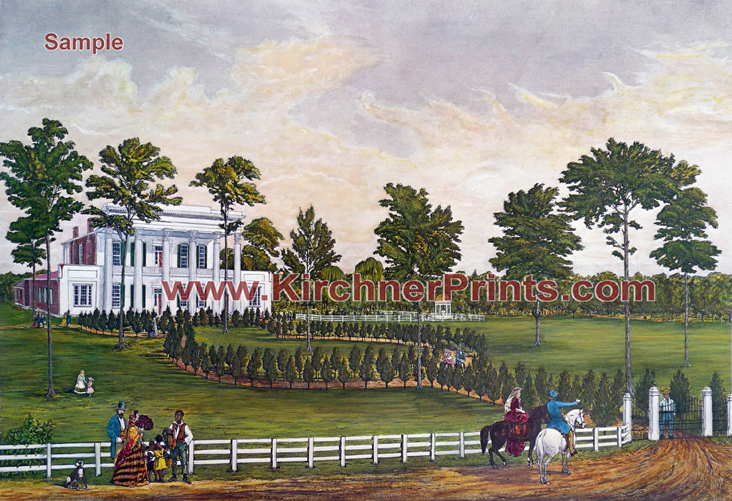 "The Hermitage - Home of Andrew Jackson"

The Hermitage, the Nashville home of Andrew Jackson and his beloved wife, Rachel was erected in 1819.   Jackson was born on March 15, 1767, and died at the Hermitage on June 8, 1845.  Jackson was the hero of the Battle of New Orleans who became president of the United States.  His admirers called General Jackson "Old Hickory" and there is a meandering road around Nashville today that is called Old Hickory Boulevard.

Many prominent people of the early nineteenth century visited The Hermitage, including the Marquis de Lafayette in May of 1825.

Rachel died in 1828 and is buried in the Hermitage gardens on the east side of the home.  The tomb is shown in the Kirchner print of the Hermitage. Shortly after her death, Jackson was inaugurated the seventh president of the United States and served two terms. In 1834, while he was in Washington, the Hermitage was severely damaged by fire. Jackson had the house rebuilt by 1837, and the front of the home was painted white to conceal the smoke that blackened the bricks. Jackson died in 1845 and was buried in the gardens with his wife Rachel.

George B. Kirchner redrew this print from an antique lithograph by architect, F.W. Strickland. Strickland's drawing differs in many ways from Kirchner's "The Hermitage." The details and the perspective on the Strickland lithograph were incorrect for the house, tomb, entrance drive and other areas. For example, the driveway in the original print was figure "8" shaped, although it was actually guitar shaped. The house was out of scale, perspective, and the details were drawn incorrectly.

It is quite possible that Strickland's original sketch was drawn correctly, but that the lithographer in Philadelphia made the mistakes when the lithographic plate was made in the 1850's. If that is the case, Strickland was probably very disappointed in the old finished lithograph. Kirchner hand-colored the recreated print of the Hermitage.

The Hermitage is one of the most popular tourist sites in Nashville and has been furnished as it was in 1836 during General Jackson's retirement. A visit to The Hermitage should be a must for visitors to Nashville. The home and grounds are beautifully maintained.

The tornado that went through Nashville in the Spring of 1998 destroyed and damaged many of the trees on the grounds of the Hermitage.   The structures were virtually untouched.

Below buttons are for Charge or Debit Card Orders

For orders by Check or Money Order, Click on: Order by Check / MO