shows a hunt scene in Nashville, Tennessee, reminiscent of the old English Hunting Scenes.  Belle Meade Farm was a world famous thoroughbred horse nursery.   During the War Between the States (Civil War), the mansion was riddled with shot.  The Belle Meade horse, Iroquois, became the first American bred winner of the English Derby.  George B. Kirchner hand colored and restored the original antique black and white print. 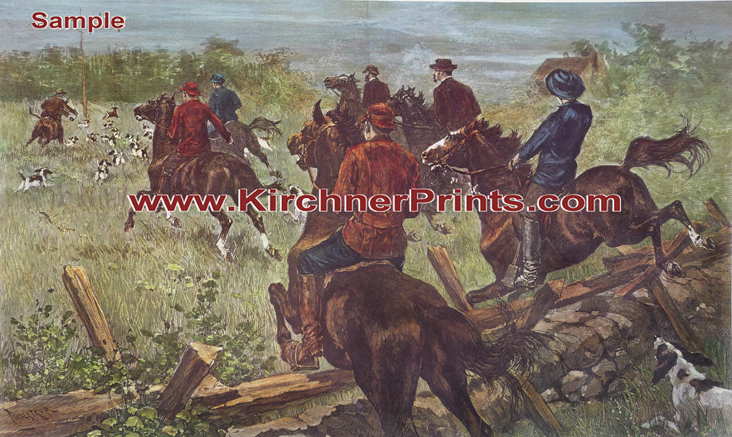 The original was printed in 1887 when the Belle Meade plantation was a world famous thoroughbred horse nursery.  The scene is action and beauty, showing deer hunters jumping one of the rock fences on the massive Belle Meade farm.  This beautiful action equestrian scenes is reminiscent of the old English Hunting Scenes.

The Belle Meade plantation was located a few miles to the south west of Nashville.  Belle Meade mansion was completed in 1853 by William Harding in the Greek Revival Style.  During the War Between the States, the mansion was riddled with shot from a skirmish between Confederate and Union troops during the Battle of Nashville in 1864.  After the war, Harding's daughter married Confederate cavalry officer, General W.H. Jackson, who became manager of the 5,400 acre plantation.

In 1881, the Belle Meade horse, Iroquois, became the first American bred winner of the English Derby.  He was the only American horse to claim that title until 1954.

Today, 30 acres of the Belle Meade plantation still surround the beautiful mansion that is on the National Register of Historic Places.   The mansion has been restored and furnished with period antiques and is open to the public for a nominal fee.  The gigantic Belle Meade Carriage House and Stable houses one of the largest collections of antique carriages in the South.

George B. Kirchner restored and hand colored the original antique black and white print of "A Deer Hunt on Belle Meade Farm - 1887."