was the favorite hotel of Andrew and Rachel Jackson.  General Jackson would travel here from the Hermitage.  Other guests were James Monroe, Andrew Johnson, Millard Fillmore, Martin Van Buren, John Overton, and the Marquis de Lafayette.  This print was restored and hand-colored from an early antique print by southern artist Judy L. Kirchner.  It is one of only two "Official Historical Prints" of Nashville's Century III. 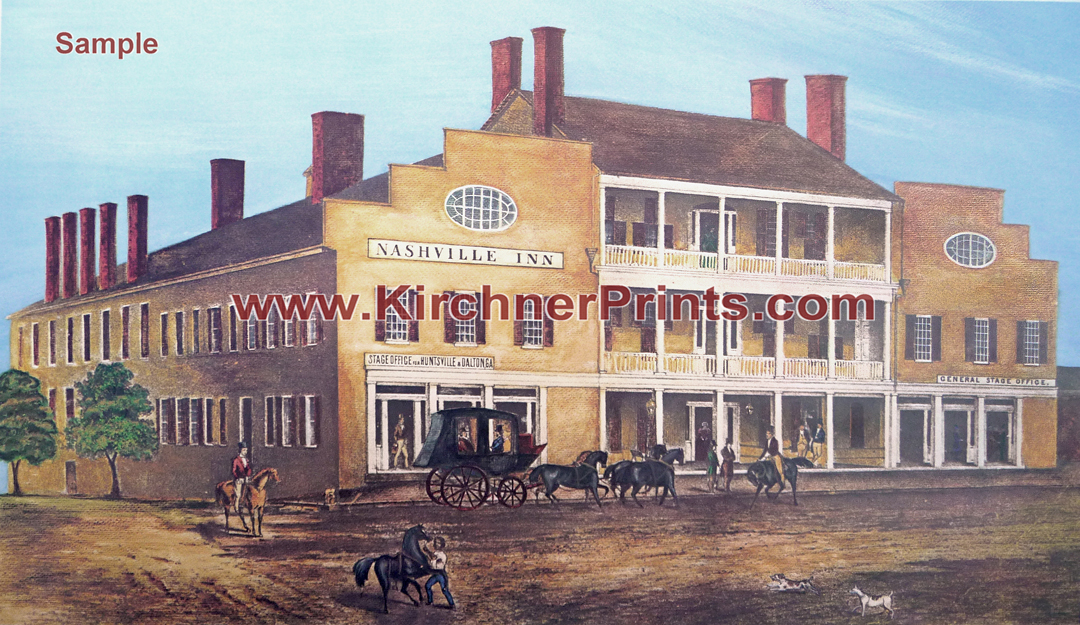 This print was restored and hand-colored from an antique print by Judy L. Kirchner.  It is one of only two "Official Historical Prints" selected by Century III, the Commission established by the Metropolitan Government of Nashville to celebrate Nashville's 200th birthday.  The other print is Kirchner's "Steamboat on the Cumberland - 1855."

The Nashville Inn was built prior to 1796, and there was no comparable hotel nearer than New Orleans, Lexington, or St. Louis.  The Inn served as an important meeting place for local residents and important travelers.

Andrew Jackson was a frequent guest at the Inn because the 13-mile trip from the Hermitage to downtown Nashville took about an hour and a half by carriage.  In 1813, Jackson was staying at the Nashville Inn when he confronted Thomas Hart Benton and Jesse Benton.  Jackson was seriously wounded by pistol shot in the showdown.  Every physician in Nashville worked over Jackson, and it was three weeks before he could leave his bed at the Nashville Inn.

The Marquis de Lafayette visited Nashville on May 4, 1825, and Andrew Jackson presided over a banquet in his honor at the Nashville Inn.  Timothy Demonbreun, 95 years old, conversed with the Marquis in their native French.  Demonbreun was living in the Nashville area before the city was "founded."

Sam Houston was staying at the Nashville Inn when he was challenged by Col. John Smith, a noted duelist.

Rachel Jackson rested in the parlor of the Nashville Inn after a round of shopping in Nashville.

Tennessee Presidents Andrew Johnson and James K. Polk were guests at the Inn, as well as Ex-Presidents Millard Fillmore and Martin Van Buren.  William Strickland, who designed the Tennessee State capitol, arrived by stagecoach from Louisville to his destination, the Nashville Inn, in 1845.

Stage coaches left the Nashville Inn three times a week for Dalton, Georgia, (about 175 miles then) and made the trip in 44 hours, at a charge of $12.00 per ticket.  The Nashville Inn charged $12.50 per month for board and lodging, and a single meal was 37˝˘.

The Nashville Inn was destroyed by fire in 1856.  The Nashville Metropolitan Police Department headquarters is now located on that site across the street from the Davidson County Courthouse.

Below Buttons for Charge or Debit Orders