was restored and hand colored by Southern artist, Judy L.  Kirchner.  The architecture is Greek Ionic by William Strickland.  It survived the War Between the States (Civil War) and is an historical part of Davidson County. 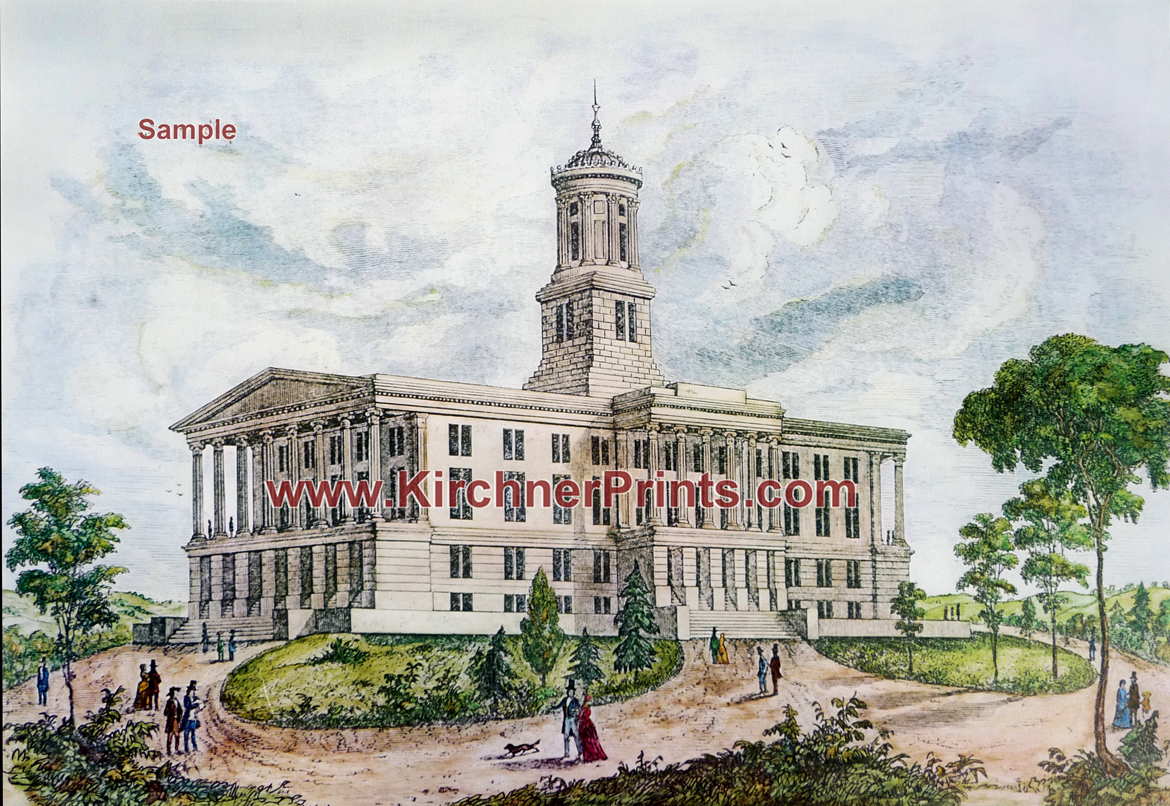 The cornerstone of the State capitol was laid on July 4, 1845, and the final stone was put in place on July 21, 1855, more than ten years later.  Some additional work was completed in 1859, the year of this print.

The Capitol is modeled after a Greek Ionic temple, and stands 236 feet long, 109 feet wide, and 206 feet from the ground to the tower top.  The Portico at each end resembles the Erectheum in Athens and the tower is patterned after the choragic monument of Lysicrates in Athens.

The building was designed by the famed Philadelphia architect William Strickland, who considered the magnificent structure to be his crowning achievement.

The structure was originally constructed of hewn stone quarried nearby.  The 1953 General Assembly provided funds for the restoration and repair of the exterior which had suffered from the effect of time and weather, the method of setting the stone, the ravages of the War between the States and inadequate maintenance.

The interior marble was quarried from the Rogersville and Knoxville area of east Tennessee.  Theo Knoch and John Schleicher, German immigrant artists, painted the frescoes on the original ceiling.

Strickland died in 1854 before the capitol was completed, and he was entombed in its Northeast wall.  His son, F.W. Strickland, supervised completion of the stone structure.

The building houses the Governor's offices, the Chambers of the State Senate, House of Representatives and Constitutional Officers.

The hill on which the building stands was acquired by the City of Nashville in 1843, and there is a legend that its owner, Judge George Washington Campbell, acquired it in 1811 as part payment of a debt for a cow.

The rafters of the roof are of wrought iron, having a span of the whole width of the building.  The columns of the principal story rest upon bases six feet square.  Rain water is conveyed from the gutters of the roof by means of cast iron pipes, eight inches in diameter, buried in the walls.  The building is still heated with furnaces utilizing hot air flues within the walls.

The tower is built up from the foundation of solid stone, containing four niches in the basement and eight to the right and left.  The principal stairway, which is thirty feet in width, leads from the center of the building to the hall of representatives, senate chamber and library.

Tennessee's State Capitol is as magnificent and functional today as it was 150 years ago.  The classic design is a beautiful part of Nashville skyline and it is one of the oldest structures in downtown Nashville.  The Capitol is open to the public at no charge.

Judy L.  Kirchner restored and hand colored this antique print of the Tennessee State Capitol, capturing the beautiful architecture and the relaxed feeling of antebellum Nashville.

Below buttons are for

For orders by Check or Money Order, Click on: Order by Check/MO